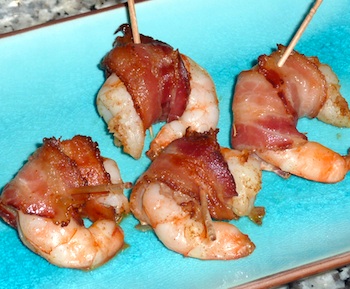 Zesty Cajun spices give this easy bacon wrapped shrimp recipe plenty of punch - and a touch of sugar keeps the shrimp sweet and juicy, almost bursting with flavor.

You'll love how fast these shrimp wrapped in bacon appetizers are to make, and your guests will keep reaching for more.

Best of all, you can mostly prepare this recipe for shrimp wrapped in bacon ahead of time, which means it's one of the best seafood appetizers for parties.

Just give it a quick bake in the oven right before serving.

We use large or extra large shrimp for this recipe - look for about 20-25 to the pound.  This larger size keeps the delicate shrimp from drying out when cooking.

If you're using large, extra large, or even jumbo shrimp, cut each slice of bacon in half.  If you choose smaller shrimp, you can cut each slice into 3 parts.

We partially cook the bacon before wrapping it around the shrimp in order to render some of the fat and also reduce the cooking time so the shrimp stays tender.

While the bacon cooks, we marinate the shrimp in Cajun spices and a spoonful of sugar to keep them plump and juicy while cooking.

Steps for making the shrimp wrapped in bacon:

1.   Give the shrimp a quick rinse with cold water, and put in a ceramic or glass bowl.  Add the Cajun spice and sugar, and stir to coat.  Let the shrimp marinate while the bacon cooks.

2.  Cut each slice of bacon in half, and cook in a skillet until the fat renders, but don't let it brown.  Remove the bacon slices from the pan and put them on a plate covered with a paper towel until cool enough to touch. 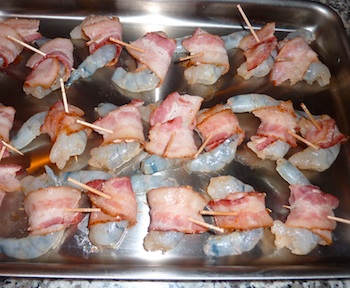 Shrimp wrapped in bacon, ready to pop into the oven

3.  Wrap each shrimp with a bacon slice, and secure with a toothpick.  Arrange them in one layer in a shallow baking pan.  Don't crowd them together, because that will cause them to to steam and will keep the bacon from browning.  If you're planning to cook the shrimp later, cover with plastic wrap and refrigerate.

4.  Bake until the shrimp and bacon appetizers turn opaque and the bacon is done.  This usually takes about 5 - 8 minutes for us, but if your shrimp are smaller or larger, your cooking time may vary.

Arrange the shrimp and bacon appetizers on a platter and serve immediately.

Note:   Although you can also broil or grill bacon-wrapped shrimp, we find baking works best because the shrimp stay juicy and flavorful, and the bacon browns more easily.

Subscribe
to our free monthly
Super Seafood Newsletter
and get new recipes in your mailbox each month.